WITCHes and Satanists against tyranny and sexism

Greetings from the resistance. Instead of going shopping at lunchtime, I'm out protesting with everyone. Here in secular, liberal NYC, we are losing our damn minds. From freedom of the press to women's rights to the environment to education, it seems we're losing. It's scary. 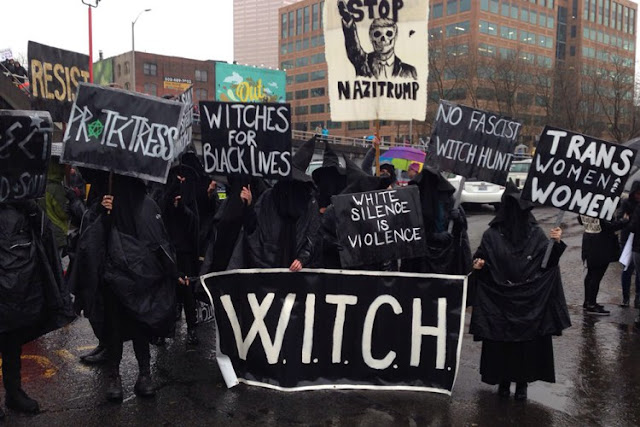 Props to the Women's International Terrorist Conspiracy from Hell (WITCH). While dressing up in costume is a good way to not be taken seriously, I do think this is more effective than other protesting groups. It's menacing-looking, not just because the people are anonymous like anarchists, but because it's a great way to troll the conservative Christians. Normally I'd say no one would actually be scared of witches, but they believe the world is a few thousand years old, so maybe they're scared of witch magic too.

Last I spoke to my occultist friends, a few people were gauging interest for a ritual protest. They scratched their heads trying to find a way to do this magic ethically. As the atheist in the room, I say if magic is real, now would be a good time to use it. One person was going to do their ritual the day of the women's protests, to tap in to the worldwide energy behind the resistance. I hope it went well.

As an atheist, my biggest fear is the Christian theocracy we are currently heading toward, especially once Trump gets rid of the separation of church and state, as he promised to do. With all the fundamentalist oppression in women's health, we are already going there. Unfortunately, atheism isn't a religion, so we don't have the same protections that other religions have...so while Catholic hospitals have the "right" not to provide medical help to a women who is miscarrying, an atheist doesn't have the right to be free of religious tyranny.

So hail Satan, the Church of Satan fights the atheist fight using the first amendment language lawmakers understand. The only reason we were being oppressed is because we didn't have any way to fight back. So while we oppose a Christian statue outside a courthouse, no one is going to listen until we say "by law, you have to have our Satanic statue, because freedom of religion." The statue was awesome. And they won the fight.

(Though, to be honest, I don't know if Trump realizes that if he gets rid of the separation of church and state, that means the Scientologists (legally a religion) get to participate in our government as well...and they have a lot more money and influence than a bunch of evangelical sects who all hate each other. At this point, I'll take the Scientologists.)

Too early to tell, but I do wonder how the turmoil is going to affect our "subculture." Current events do affect our "scene"--whether we all go DIY because we're all unemployed, we lose our trench coats because of Columbine. Before 9/11, a bunch of us wore bullet belts...lol wouldn't wear that now. To the young people "coming of age" now, I really wonder what direction they'll evolve our scene in.

Haha we'll return to trends and pretty pictures of clothing next time, assuming I won't be in political prison lol.
Posted by Mutant Stomp Friends at 9:44 PM 6 comments:

Just a heads-up that most clothing stores are having their post-season sales right now. It's the best time of the year for sales!