Shop With Me: Doll's Kill Shoes

Dolls Kill is the online mall for alternative clothing. There's a rotating list of dark/goth brands you may or may not have heard of and always something to either fall in love with or roll your eyes at so hard they roll out the door.

These shoes are all from the What's New section. 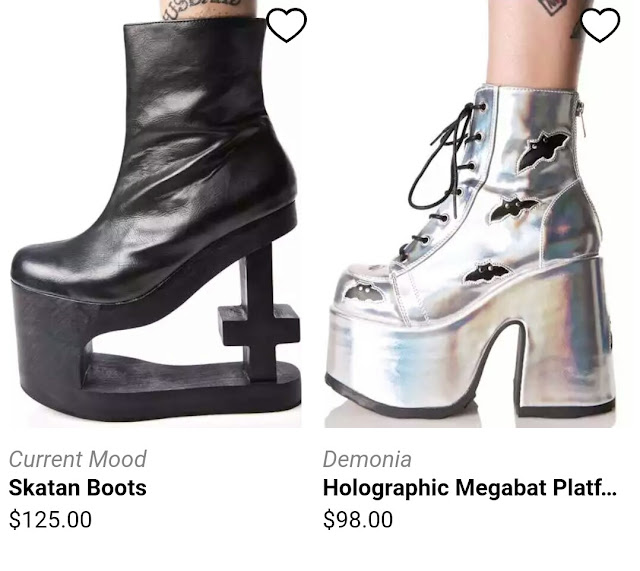 So, I know Demonia has cool but uncomfortable shoes, these awesome cybery bat platforms included, but can anyone vouch for Current Mood? Are they good quality? If I didn't swear off heels, I'd get these Skatan boots. 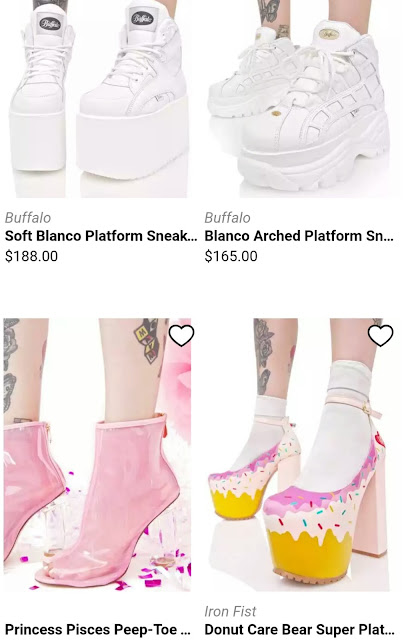 One day I'll drop the cash for Buffalo platforms.  They are usually $300, so I hope the quality hasn't gone down. White shoes just seem like a bad idea. As for the Princess peep-toe boot, I think "Sebastian Columbine" because she's wearing pink sexy clothes these days... She's probably buying these.  Lol at donut care heels. I hope DK never stops selling ironic shit. 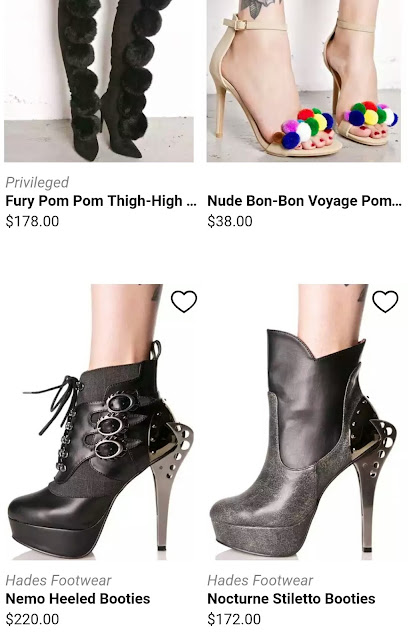 WTF with the pom pom boots. Where did these come from? I can't think of what trend this is following or whom it is knocking off. What outfit would work with this? So unflattering. Bon bon shoes are a little boring for DK. I feel like I've seen the Hades footwear booties in the 90s or 00s. Maybe it was a New Rock heel. Kind of dated looking, but. I'm probably wrong, since all that is coming back. 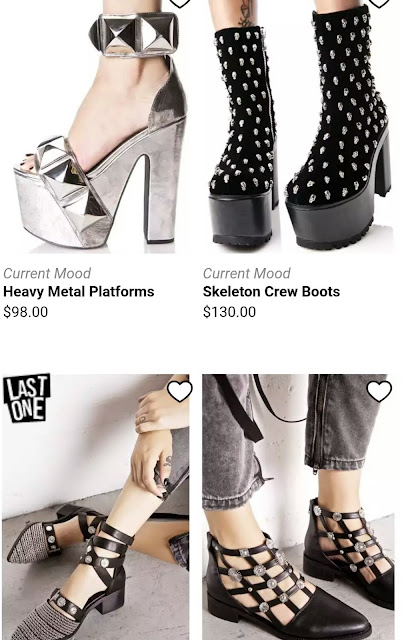 Holy smokes, I love the heavy metal shoes. I loved those 1-inch pyramid studs back in the day. Skeleton crew boots remind me of ones I've seen before, but I do love that they aren't heels. The two hipster pointed toe cut out shoes are pretty wearable. You sure you don't want to put pot leaves or swear words on it, Dolls Kill? 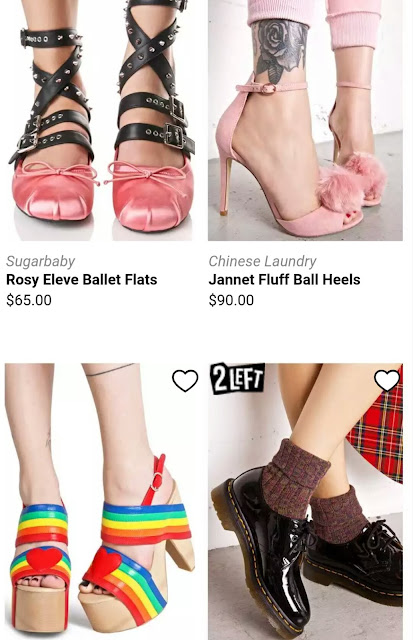 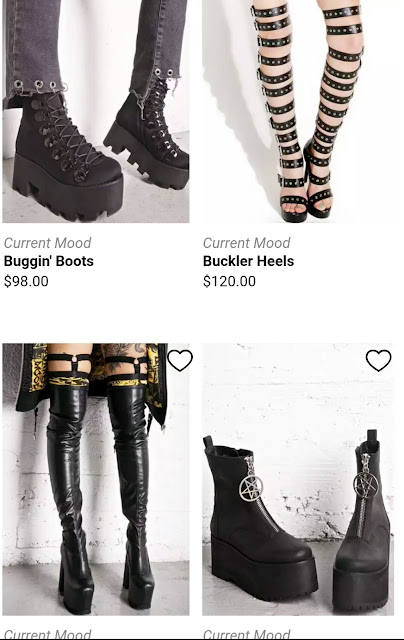 So again I ask, can someone tell me anything about Current Mood? Like, these are awesome. Let me know in the comments.  I so want those pentagram shoes, but am afraid it'll be a demonia repeat. 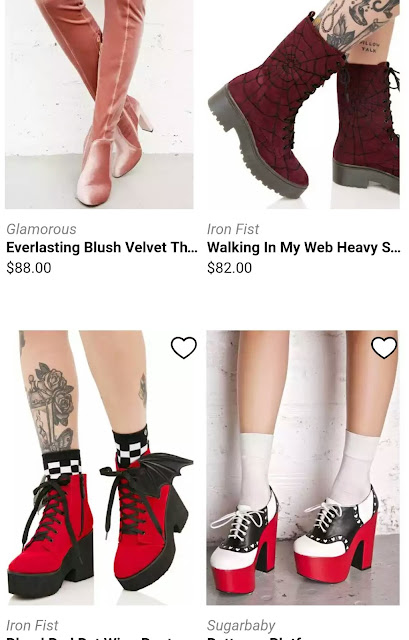 Velvet and pale pink boots for the retro-sexy-glam look I used to see all the time on Tumblr, when I went on Tumblr. Spiderweb boots are a little junior for me, but I like the color. The clear winner for me is the bat wing shoe, especially the way they styled it here with those checked socks.  I have to admit, I always hated these shoes... But since they are super contrasty in bold red and black, I think it works, especially if a person's style is that cartoony perky spoooooky goth style. Meh at the wingtip oxford heels. Would rather get the bat wing shoe. 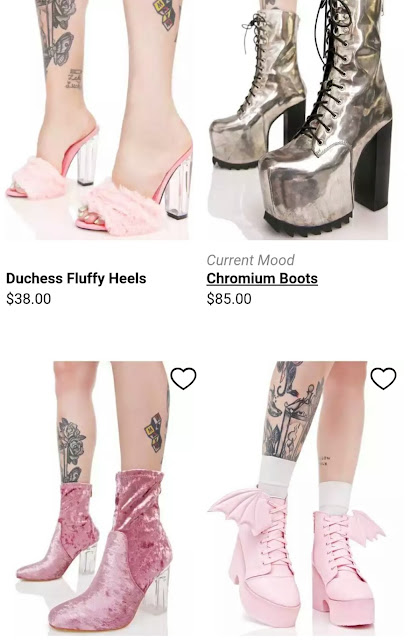 Ugh I am so tired of retailers thinking goths want Barbie pink bullshit.  It's a photo shoot idea, not anything anyone wants to wear.  The Chromium boots are pretty killer.  I really hope cyber comes back. 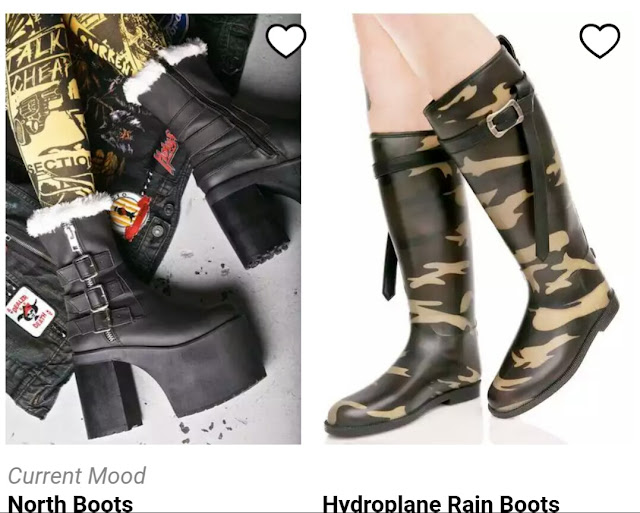 Omg I need a pair of faux heel platforms like the North Boots. The look of heels, the comfort of flats. Army rain boots...Meh. I'd enjoy some alternative rain boots though... or ironic ones 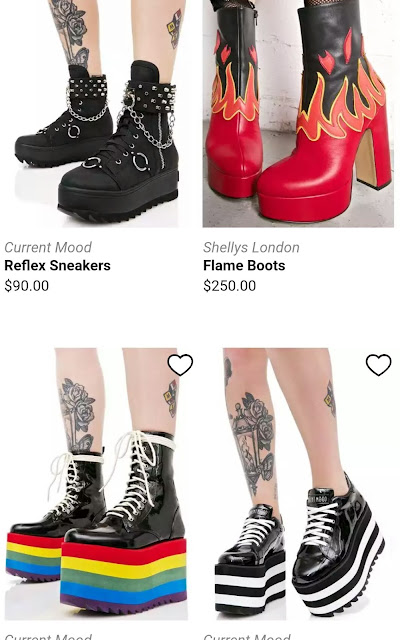 Aside from the Reflex Sneakers, the rest are all late-90s, early 00s shoes I used to own.  Especially the platforms. 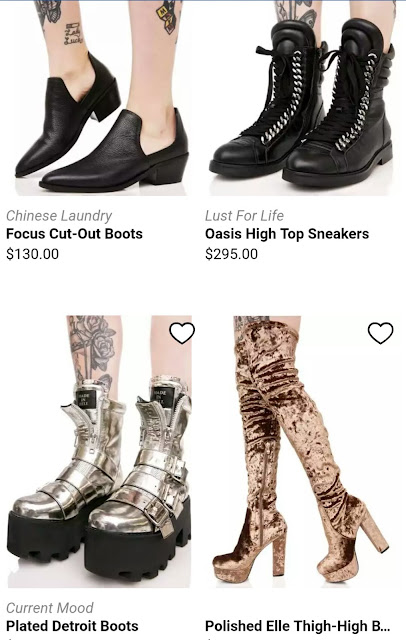 Don't care about the Granny shoes, the sneakers or the velvet boots. Those plated Detroit Boots are killer.

To be real though, I usually regret buying trendy stuff from DK.  Like, if there is an online store thats most likely to end up sitting in my closet unworn, it's this store.  That being said, does anyone have a pair of Current Mood shoes? Also what shoes are you eyeing at the moment?

Email ThisBlogThis!Share to TwitterShare to FacebookShare to Pinterest
Labels: shoes, Shop with me