Roses and Vellum and Little Corp Goth Girl recently did a post on dark fashion "stereotypes" featuring those fun illustrations by Trellia. I thought I'd join in too.

I first got into dark fashion in a real way (beyond band t-shirts) through the whole rivethead thing. I don't really listen to too much industrial (though I was listening to Combichrist today) anymore, I still love the old look. Like the little description says, I never considered myself a goth. The clothing is pretty masculine, tough, grungy, futuristic, military--quite the opposite of the fussy, feminine, vintagelike goth fashion. 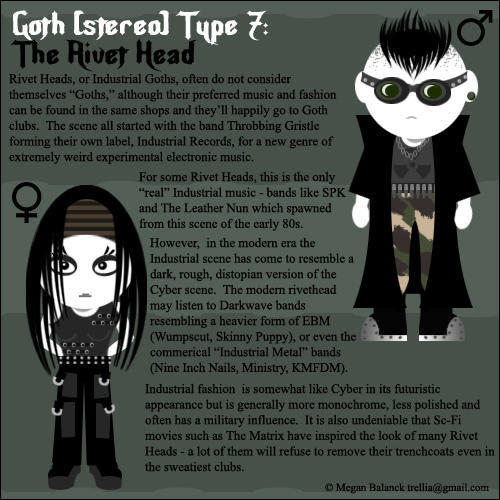 That's where I started dark fashion. I still think it's awesome, and it reminds me of Chicago of course. I've moved on though. These days I'm wearing what Trellia calls the "Haute Goth"--I watch the runways and can name many of the high-end goth designers. Also, with the benefit of living in NYC, I can get high end stuff for a sliver of the price. We still have the old-school department stores that actually sell designer stuff at a discount, unlike TJ Maxx and outlet stores that license the brand name and make it at some slave-labor factory for pennies. Oh, what a snob I am. Personally, I love how weird and creative it all is. I get too bored staring at the same old same old.

These styles are pretty work-friendly (despite the below drawing). You won't look wall-street corporate in a fussy pantsuit, but you'll definitely look professional. This is the look for art directors and eccentric managers (like yours truly).  Also Daphne Guinness (below), one of my personal style icons, who is basically known for being rich and weird. 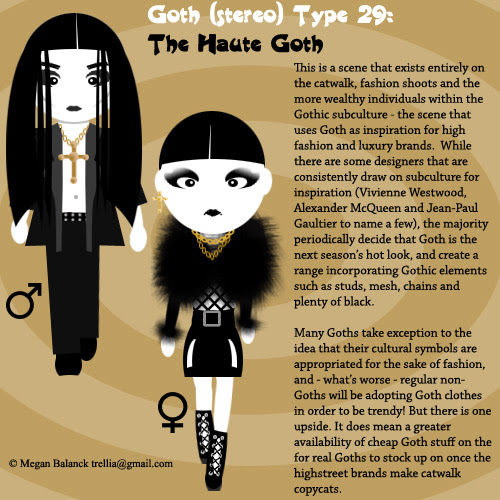 And finally, I have to say that I'm loving the nu-goth look that's been happening. The below description nailed what I like about this--a throwback to the classic goth look, and oh thank god the Japanese influences are almost gone. I love the big, flashy occult symbols that hearken to the old "satanic panic" from the 90s--a dark time in the history of dark fashion until Columbine. There are parts of nugoth I'm tired of seeing (because of tumblr), but for the most part, I'm a fan. I love the shapeless black things and the ninja goth styles too. If there're any "goths" trashing this, I'm going to revive the old "goth vs rivethead" pissing contest from my time. 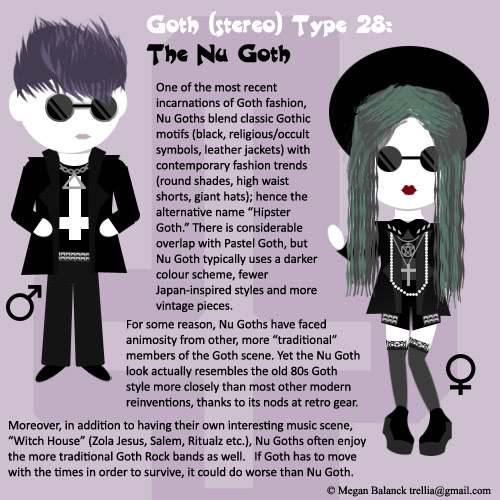